Thursday this week my girlfriend and I went to the rockopera “Jesus Christ Superstar” set up by Den Norske Teatret (the Norwegian Theater) in Oslo. Turbonegro vocalist Hans Erik Husby Dyvik was fantastic and powerful in the role of Jesus. The entire production was like a powerful rock concert, with a well known and yet modernised story at the base. The play takes a modern twist på the story of Jesus and presents it as what might happen if Jesus came now in modern times instead of 2000 years ago. It places the focus on Jesus as one who makes us see the society we do not wish to look in the eye, one who sits at the far end of the table and seeks contact with the weakest most vulnerable human being in the room. The protector of the repressed and outcast.

The entire production had a rock concert feel about it. There were these cool electric guitar players who were on stage all the time, both as part of the background actors and at the same time whaling out this fabulous rock guitar music. It was really so much more than I expected and nothing like the Jesus Christ Superstar production I saw at a local theatre in New York in the 80’s. 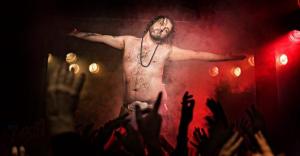 Husby in the roll of Jesus Christ, photo curtesy of Oslopuls.

Just as raw and controversial as the play was in the beginning the new setting and hard rock angle which Den Norske Teater used was extremely good. Charlotte Frogner who played Mary Magdelena was an excellent contrast to Husby with his ‘large’ heavy metal presence. Frogner’s roll, while clearly that of a prostitute in this production is repressed, shy, and with a meek feminine voice sings out her love and admiration for Jesus’ character with a surprising tenderness.

Frogner praises her colleague Hans Erick Husby Dyvik saying in an interview with VG that he adds a whole new energy to the scene. He is really a great guy, and easy to feel safe around…and it is easy to go to work when you know it is going to be a raw rock concert each and every day!

Husby has said that it was tough to play Jesus, because he sees so much of his own history in the story. He has been involved in narcotics and the underworld life, and then achieving a rapid rise to fame at least in Norway he has quite a following. So he could use his own experience of oppression, substance abuse and poverty in interpreting his role. He says that these things have in many ways not gotten better since Jesus lived, but have in fact gotten much worse in some parts of the world.

At the same time the play caries a positive message that hope and joy is possible on the other side and all is not lost. For those in Norway with the opportunity to see this production I recommend it as the best theatre experience I have ever had…and for the rest of you who cannot come to Oslo…I am terribly sorry. Because I don’t think Jesus Christ Superstar will ever be presented in this way anyplace else in the world at any time…it was really a once in a lifetime experience. Unless of course I drag along Renny and see it one more time before it closes!!


Update! As many have read on RennyBA’s blog we did go and see it again and he loved it as much as I did. I just found this great video from the NORWEGIAN PRODUCTION – its an add for the one we saw, and I am putting it in here for your enjoyment. You REALLY get an idea of the provocative, cutting edge, controversial and totally rocking atmosphere this show had. It was so awesome!

The beauty of fall filling our lives